I'm very happy to announce to you the release of my latest short scare-Black Silk Panties. This story is the first which will be part of my new collection of Horror Shorts, Choice Cuts-A Bite From The Dark Realm (coming in Feb/March 2016.)

Jacob O'Halloran is a 46 year old bachelor. He's never been intimate with a woman, thanks to the fervent and twisted religious beliefs of his Mother. Even though she is long dead, his Mother still berates him from beyond the grave every time Jacob has an impure thought.
Jacob relieves his frustrations by stealing womens panties. His little 'hobby' has never caused him any problems... until he tries to steal Audrey's panties. Let's just say, Audrey isn't very happy about the attempted theft...not happy at all. 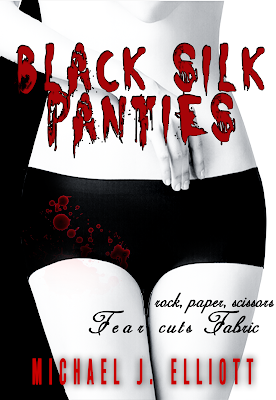 You can purchase Black Silk Panties, available on all reader platforms from my dedicated author sale
site. Just click the link below.

As Always dear reader,
Pleasant Dreams,
MJE.
Posted by Unknown at 19:00 No comments:

Hi everyone,
As some of you may be aware, I'm currently writing my second collection of horror stories-Choice Cuts-A Bite From The Dark Realm.
I have some good news for you all. The first short story from the collection,entitled Black Silk Panties, will be released as a 99c short story.
The story revolves around Jacob O'Halloran, a sexually repressed man who is still berated by his long dead mother.
Jacob is a panty thief, or as we call them here in Australia, a snowdropper. When Jacob finds a pair of black silk knickers on a suburban backyard clothesline he thinks he's died and gone to heaven. Until he meets Audrey, the owner of said knickers.
Lets just say, Audrey isn't quite all together.
If the premise of this story intrigues you, sign up for my mailing list and be the first to learn when Black Silk Panties will be released as well as more news and sneak previews from the new collection, Choice Cuts-A Bite From the Dark Realm .

And In Other News...
Dinner For Two, Mr Westacott's Christmas (The revised version with bonus preview of Mr Westacott's Holiday.) and Sharpshooter are all now permanently FREE on all ereader platforms. In addition, Portraits of Dread is on sale for 99c till the end of Feb 2016 (Normally $2.99). Free and cheap scares for the new year and the holidays.

In the meantime....
Wanna see something really scarey? I'm very proud to release the official book trailer for Choice Cuts-A Bite From The Dark Realm.
Now watch carefully. When I first saw it I thought the clip was broken because the very clever designer had added a tv test pattern to the clip, keep watching or as they used to say on the Outer Limits, "Do not adjust your sets."

I was very honoured and happy to recently have been interviewd by some wonderful authors/bloggers during the release of Portraits of Dread.
Not only did I get to talk about Portraits but I was also given the opportunity to discuss my writing style and methods and provide a few teasers as to what I'm currently working on.
Here is a list of all the sites where I made a guest appearance.

Angela B. Chrysler and Bergen

I love interacting with my raders so if you have aquestion you'd like to ask me please feel free to leave a comment or question:)

A Spooktacular night with The Awethors and yours truly.

Halloween 2015 turned out to be a fantastic night for my writing group, The #Awethors and yours truly.
In conjunction with fellow 'dark' author Rocky Rochford, I helped organise Fright Night with The Awthors. Fright Night wasn't just a great opportunity for us all to celebrate the scariest night of the year but it was also the opportunity for both Rocky and myself to launch our newest works. One of the great things was the chance to highlight some of the Awethors and their works.
We were introduced or reacquainted with works by Patrick Elliott, Christie Stratos, Joe Compton, Jason Greensides, Karen Mossman, Simon Coates and so many more.
There were some wonderful takeover spots hosted by some fabulous indie authors. It was a fun night.
The night proved a huge success for the launch of my collection of short story collection, Portraits of Dread. I had some wonderful support from the Awethors who happily jumped on board to help promote my first major release.
The reult of all this was that Portraits of Dread reached #33 on Amazon's ranking for short stories-horror section.
A huge thank you to all the Awethors for your support and to my readers who got behind the launch. 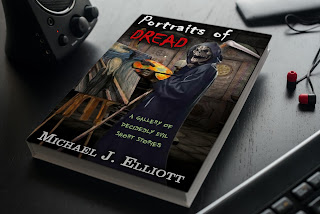